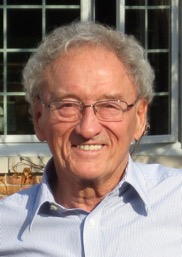 William H. Cikanek “Bill” of Willowbrook, IL passed away on August 9, 2019 at the age of 90 surrounded by loved ones. Bill was born on June 1, 1929 in Chicago, IL to James and Dorothy (nee Beyer) Cikanek.  He graduated from Harrison High School in 1948.  He worked as a switchman for the Burlington Northern Railroad for 42 years retiring in 1991.

As a devout Christian, Bill was an active member at Christ Church of Oak Brook where he met his wife, Connie. He married Constance (Connie) Springborn, nee Boltz, in 1980 and they had 38 glorious years together. Connie preceded Bill in death as she began her eternal life February 27, 2019.   Also preceding him in death were his parents, James Cikanek, Dorothy Cikanek (nee Beyer) and his brothers, Jim Cikanek and Ken Cikanek.

A Celebration of his Life service will be held on Monday, August 26th at Christ Church in Oak Brook, 501 Oak Brook Road, (corner of 31stSt. and York Rd). There will be visitation at 10:00 am, service at 11:00 am and a luncheon immediately following the service.   In Lieu of flowers, donations in honor of Bill can be made to Christ Church of Oak Brook, Moody Bible Institute or Alzheimer’s Association.

Offer Condolence for the family of William Cikanek

When a death occurs a lot of emotions can come to the surface and confuse clear thought. Normal END_OF_DOCUMENT_TOKEN_TO_BE_REPLACED

Funeral and Cremation costs can be very confusing.  Often times other funeral & cremation providers will quote what seems like a low price, but actually they do not give you the complete costs and there will be hidden add on charges after you have chosen to utilize their services.  We have made it easier to understand by creating our: "No Hidden Fee Guarantee" package plans. These plans may include : Service Fees Merchandise Cemetery / Crematory Fees Cash Advances Taxes We guarantee that the price we give you over the phone or you see on this site, will be the price END_OF_DOCUMENT_TOKEN_TO_BE_REPLACED