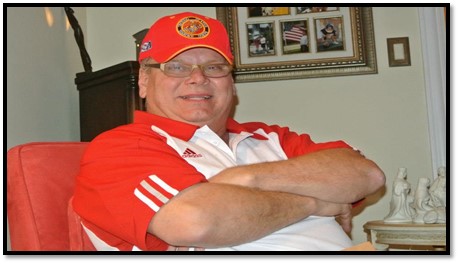 After a hard fought battle with cancer, Steve Bruno Abramowicz passed away on October 6, 2017 in Nashville, TN at the age of 65. He leaves behind his life’s love and best friend Sara, his beautiful gems, his son Steven and daughter Stephanie.

Steve was born on December 18, 1951 in the back of the yards neighborhood of Chicago, IL to father Bruno Abramowicz and mother, Geraldine Abramowicz. He grew up in a large, loving family with two sisters and three brothers.

He graduated from St. Rita High School and continued his education at DePaul University where he graduated with an accounting degree.

Later in life, he developed a strong passion for golf. He found joy and solace in the game, and enjoyed playing for the rest of his life. For Steve, golf was not only a hobby but a way to channel his competitive energy.

He was a proud veteran of the U.S. Marine Corps who served during the Vietnam War.

Steve married Sara Munoz on April 8, 1995. Together they settled in Burr Ridge, IL where they raised their two children, Steven and Stephanie.

He was a devoted husband and loving father who enjoyed dancing, karaoke with family and friends and taking care of his two dogs, Stella and Benny. He was also an avid cook, able to prepare his mother’s crepe recipe like no other.

When diagnosed with cancer in 2016, he remained dedicated to his daily activities and in his will to fight his illness.

He was a brave, companionate, iron-willed man.

Steve is survived by his Loving wife Sara and children, Steven and Stephanie, as well as his sisters, Kathy Wydajewski (Joseph) and Linda Heiy (Tom), his brothers Ronald (Cheryl), Richard, and William (Ayleen); and numerous nieces and nephews. He is preceded in death by his parents.

Offer Condolence for the family of Steve Abramowicz

When a death occurs a lot of emotions can come to the surface and confuse clear thought. Normal END_OF_DOCUMENT_TOKEN_TO_BE_REPLACED

Funeral and Cremation costs can be very confusing.  Often times other funeral & cremation providers will quote what seems like a low price, but actually they do not give you the complete costs and there will be hidden add on charges after you have chosen to utilize their services.  We have made it easier to understand by creating our: "No Hidden Fee Guarantee" package plans. These plans may include : Service Fees Merchandise Cemetery / Crematory Fees Cash Advances Taxes We guarantee that the price we give you over the phone or you see on this site, will be the price END_OF_DOCUMENT_TOKEN_TO_BE_REPLACED