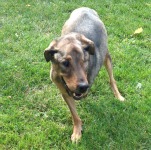 Sam, my 12 year old rescue dog passed away peacefully on October 16, 2012 after a sudden illness. He is survived by his human family of  David Fisher, Debby and Trudy Donnellan.  He is also survived by his pet companions; Fonzie, Lupe and The Spider.  He is preceded in death by Shelly and Hankie.  Even though Sam was missing a leg and an eye, this never diminished his love of life, the chasing of Fats the Squirrel (which he never did catch), the gentleness to which he greeted anyone who wanted to pet him or his ability to climb up on something to get his favorite snack or take all the garbage out of the can.  Sambo was cremated at Hinsdale Animal Cemetery and his ashes will be kept at home.

Offer Condolence for the family of Sam Fisher

When a death occurs a lot of emotions can come to the surface and confuse clear thought. Normal END_OF_DOCUMENT_TOKEN_TO_BE_REPLACED

Funeral and Cremation costs can be very confusing.  Often times other funeral & cremation providers will quote what seems like a low price, but actually they do not give you the complete costs and there will be hidden add on charges after you have chosen to utilize their services.  We have made it easier to understand by creating our: "No Hidden Fee Guarantee" package plans. These plans may include : Service Fees Merchandise Cemetery / Crematory Fees Cash Advances Taxes We guarantee that the price we give you over the phone or you see on this site, will be the price END_OF_DOCUMENT_TOKEN_TO_BE_REPLACED