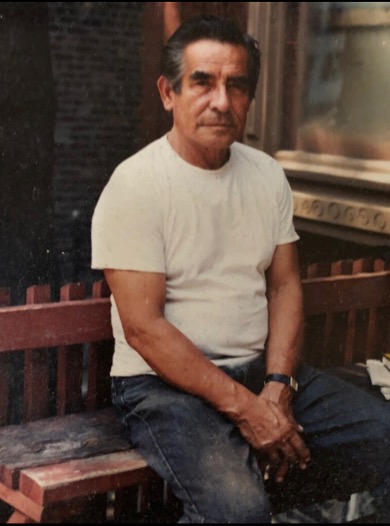 Pedro Macías passed away on May 30, 2020. He was the third of seven children born to Delfina and Marciano in Guanajuato, Mexico on October 23, 1922. In 1942, at the age of 20, he migrated to the United States under the Bracero Program, a migrant labor agreement between the US and Mexican governments that recruited Mexican workers to fill labor shortages during WWII.  With his brother Jesus, he was among the first recruits to participate in the program.  For nearly two decades, Pedro migrated back and forth between the US and Mexico as an agricultural and railroad worker in 17 US states.  He shared stories of living and working in Spanish Harlem and Trenton, NJ, as a contract laborer for the Pennsylvania Railroad Company. He also described working alongside Italian and German prisoners of war.  Like many immigrant workers today, he confronted racism and extreme exploitation.

During one of his return trips to Mexico, he met Maria (Chavela) Macías. They married in 1955. In the 1960s, after a pilgrimage to the Basilica of Our Lady of Guadalupe in Mexico City, they migrated to United States with their four children and settled in the Mexican barrio of Pilsen in Chicago, where four other children were born.

In Chicago, Pedro worked alongside other compatriots for the Reynolds Metals Company and was a member of the United Steelworkers Union as well as the Union Binacional de Ex-braceros (Bi-national Union of Former Braceros), which organized to recover wages deducted by the Mexican government during his early years as a Bracero.

In the 1970s, he was able to purchase his first home in Pilsen by working double shifts at the metal factory. He was known for taking in strangers and relatives recently arrived from Mexico. He and his family were also active parishioners at Providence of God Catholic Church in Pilsen.

After retiring, Pedro and Chavela spent their remaining years going back and forth between Pilsen and Mexico for over four decades. They were devoted to La Virgen of Guadalupe and opened their home in Mexico to the entire town every December to host a mass and rosary in her honor. After Chavela’s untimely death, he returned to Pilsen, and remained there with his eight children until his peaceful passing at the age of 97.

What most defined Pedro was his strength, charisma, sense of humor, profound faith, and devotion to his family. He was strong because of his faith and years of hard labor, but he was also was a humble and generous man.  Though he only went up to the fourth grade, he was active in his children’s education and raised them to be proud of their bilingual and bicultural heritage. And while most of his children graduated college, he made very clear through his actions that faith and service to others mattered more.  His children remember him as someone who carried himself with great dignity and believed in the dignity of all people.

For those wishing to pay respects, we will host a memorial service in the near future. Due to the Covid-19 Pandemic, we are unable to host a public viewing or burial.

In lieu of flowers, we kindly ask that you consider giving a donation, in honor of our father, to the Chicago-based immigrant rights organization, Organized Communities Against Deportation (OCAD),https://donorbox.org/organized-communities-against-deportations or to Providence of God/St. Procopius Catholic Church, https://www.gofundme.com/f/jhtqd-st-procopiusprovidence-of-god

Offer Condolence for the family of Pedro Macias

When a death occurs a lot of emotions can come to the surface and confuse clear thought. Normal END_OF_DOCUMENT_TOKEN_TO_BE_REPLACED

Funeral and Cremation costs can be very confusing.  Often times other funeral & cremation providers will quote what seems like a low price, but actually they do not give you the complete costs and there will be hidden add on charges after you have chosen to utilize their services.  We have made it easier to understand by creating our: "No Hidden Fee Guarantee" package plans. These plans may include : Service Fees Merchandise Cemetery / Crematory Fees Cash Advances Taxes We guarantee that the price we give you over the phone or you see on this site, will be the price END_OF_DOCUMENT_TOKEN_TO_BE_REPLACED