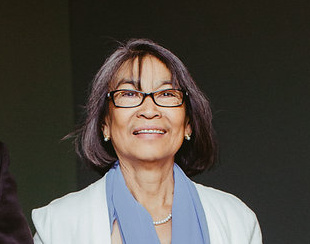 Myrna never lived life in fear & never feared death. Her motto to us was always “If I die, then I die.” She always put her life in God’s hands. She was our bionic woman who survived many health battles.

She lived in the Philippines the first 40 years of her life. She got married on January 1, 1977 to Isagani Paluero and had a son, Aries, on June 25, 1978. She became a widow in January 1980 and raised her son by herself with some help from her siblings. She moved to the United States with her son to live the American dream in April 1987. She lived in Broadview, IL for 10 years and moved to Woodridge, IL in 1997.

Myrna loved taking care of her flowers and shopping. She also liked watching the Cubs on TV. She was an amazing cook. She enjoyed having family over for dinners and visiting her friends. Playing and hanging out with her granddaughters (Alana, Jordi, & Lily) gave her the most joy & happiness in life. She was a loyal friend, an amazing mother, supportive sister, and a loving grandmother.

Funeral Mass will be held at St. Scholastica Church, 7800 Janes Ave., Woodridge on Saturday, January 8, 2022 at 10 am. There will be last viewing at Beidelman-Kunsch Saturday morning from 8 to 9 am and proceeding to church for Mass. Burial will be held at Assumption Cemetery, 1S510 Winfield Rd., Wheaton immediately after mass.

Offer Condolence for the family of Myrna Rodriguez Paluero

When a death occurs a lot of emotions can come to the surface and confuse clear thought. Normal END_OF_DOCUMENT_TOKEN_TO_BE_REPLACED

Funeral and Cremation costs can be very confusing.  Often times other funeral & cremation providers will quote what seems like a low price, but actually they do not give you the complete costs and there will be hidden add on charges after you have chosen to utilize their services.  We have made it easier to understand by creating our: "No Hidden Fee Guarantee" package plans. These plans may include : Service Fees Merchandise Cemetery / Crematory Fees Cash Advances Taxes We guarantee that the price we give you over the phone or you see on this site, will be the price END_OF_DOCUMENT_TOKEN_TO_BE_REPLACED