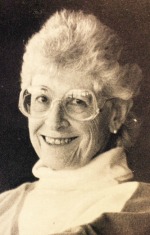 Margaret Ruth Hart Lewis, formerly of Winnetka and Evanston, died peacefully at the Presbyterian Home on April 17, 2015. She is survived by daughters Elizabeth Powner (Tory) and Laura Haywood (John), her brother James W. Hart of Denver (Ancella), four grandchildren, nine great-grandchildren, and five nieces and nephews. She was preceded in death by her husband, Sidney J. Lewis.

Her family moved to Winnetka when she was six. At age sixteen, she met her future husband, a pilot stationed at Glenview Naval Air Base. After the war, Peggy and Sidney married in 1947.

Peggy discovered her life’s work in the early 1960s. During her long career at Greeley School in Winnetka, she taught hundreds of young children to read. She was a lifelong learner who continuously studied child psychology and teaching techniques to improve the learning environment in her classroom. In 1973, she took a sabbatical year in London, where she and Sid studied for a year.

Peg and Sid loved to travel. Their year in London was packed with cultural experiences, including music, theater, Indian restaurants, and exploring. Peggy’s favorite landscapes were in Ireland. She loved the works of James Joyce and exploring his Dublin haunts.

Peggy and Sid moved to Evanston in 1975. She retired from teaching in the 1980s and embarked on a second career as a volunteer hospice counselor. Peggy served the families of dying people, including AIDS patients at the height of the epidemic. She spent hours with each family, listening and counseling day or night.

Peggy was an avid musician. She grew up playing the piano and then took up the viola as an adult, playing with string quartets and community orchestras. She and Sid loved to attend summer string workshops such as Interlochen Arts Camp in Michigan; she would play music and he would read and enjoy nature.

Her habit of reading constantly lasted her entire life. Even near the end of her life, she read for hours every day. She loved all kinds of literature in addition to James Joyce: Patrick O’Brien naval adventures, biographies, English mysteries from Agatha Christie to PD James, even the occasional trashy novel.

Peggy was a vivacious person who made friends wherever she went. She loved to hear people’s stories and was a marvelous listener as well as a witty conversationalist. Her politics were decidedly left of center and she was vocal about it.

She adored her four grandchildren, who visited Evanston every summer of their childhoods. Peggy and Sid took them to museums, Ravinia concerts, baseball games, and the beach.

She will be forever missed by her family and friends; her legacy is the many Winnetka children that she taught.

There will be a memorial gathering at a later date. Please sign the guestbook to be notified.

Offer Condolence for the family of Margaret Lewis

When a death occurs a lot of emotions can come to the surface and confuse clear thought. Normal END_OF_DOCUMENT_TOKEN_TO_BE_REPLACED

Funeral and Cremation costs can be very confusing.  Often times other funeral & cremation providers will quote what seems like a low price, but actually they do not give you the complete costs and there will be hidden add on charges after you have chosen to utilize their services.  We have made it easier to understand by creating our: "No Hidden Fee Guarantee" package plans. These plans may include : Service Fees Merchandise Cemetery / Crematory Fees Cash Advances Taxes We guarantee that the price we give you over the phone or you see on this site, will be the price END_OF_DOCUMENT_TOKEN_TO_BE_REPLACED