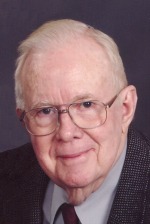 Ken was the son of Edna and Burr Ridgway. After growing up on the family farm, he joined the Navy in 1942; attended aviation radio school; then joined the forces in the South Pacific and saw action, including Formosa and Iwo Jima.

After his discharge, Ken earned a degree in Chemical Engineering.  He met and married Margaret Markley and they raised five daughters together in a happy home.  He worked at Hanford Atomic Works in Richland, Washington for 24 years.  The family then moved to Wheaton, Illinois where he took a position with the Nuclear Regulatory Commission as a lead investigator.

Upon retirement he enjoyed his many hobbies including bridge, crafting, investing, genealogy, rock hunting, camping and traveling.  He was an active volunteer at church, serving as caretaker and treasurer, and in the community as an active member and Visitor Scheduling Chairman of Mended Hearts.

In June 2008, Ken and his brother Myron were on the inaugural flight for Honor Flight Chicago.  Along with 60 other WWII veterans, they visited the WWII memorial in Washington D.C. during a day filled with honor.  Ken has given informational talks and reached out to veterans to spread the word about Honor Flight Chicago.

A loving husband and father, Ken’s generous and gentle nature and his strength and courage will be remembered by all who knew him.

He is survived by his daughters Janet Elaine, Barbara Lynn, Gwendolyn Ridgway Johnson (Dave) and Carolyn Marie (John) and two grandchildren, Alex and Abby Johnson.   He was preceded in death by his wife of 57 years Margaret Ridgway, his daughter Linda Diane and his brothers, Jim, Bob, and Myron “Dick” Ridgway.

A memorial service will be held on Saturday, August 25th at 11am with visitation for family and friends at 10am. The service will be at St. Matthew United Church of Christ, 1420 S. Gables in Wheaton, IL.  In lieu of flowers, memorials in Kenneth Ridgway’s name can be directed to:

Offer Condolence for the family of Kenneth Ridgway

When a death occurs a lot of emotions can come to the surface and confuse clear thought. Normal END_OF_DOCUMENT_TOKEN_TO_BE_REPLACED

Funeral and Cremation costs can be very confusing.  Often times other funeral & cremation providers will quote what seems like a low price, but actually they do not give you the complete costs and there will be hidden add on charges after you have chosen to utilize their services.  We have made it easier to understand by creating our: "No Hidden Fee Guarantee" package plans. These plans may include : Service Fees Merchandise Cemetery / Crematory Fees Cash Advances Taxes We guarantee that the price we give you over the phone or you see on this site, will be the price END_OF_DOCUMENT_TOKEN_TO_BE_REPLACED