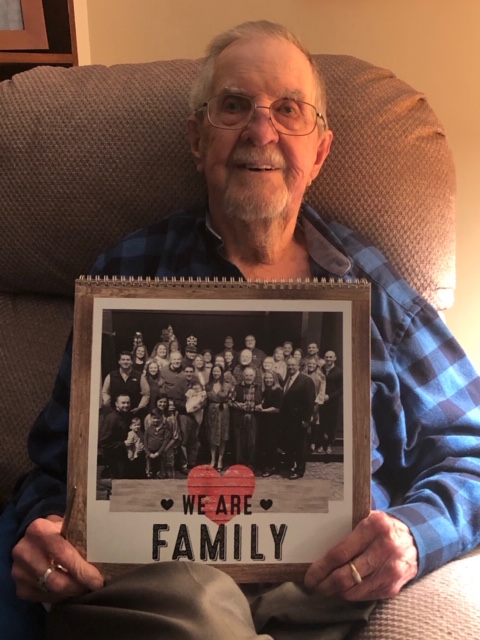 Harry Hitzke, age 96, passed away peacefully Saturday evening, June 13, 2020, in his favorite recliner chair at his home in Bolingbrook, Illinois.  Harry was born in Chicago on January 8th, 1924.  Harry proudly served his country in both the Pacific and European theaters during World War II.  After his military service, Harry married Beverly Poggendorf in Chicago IL.   Harry and Beverly eventually moved to Hinsdale, IL where they raised 4 baby boomer children.  After Beverly’s passing in 1982, Harry carried on in life enjoying time with his children and eventually his grandchildren and great-grandchildren.  In 1987, he married Sally Meyers and they shared life together in Arkansas for 16 years before moving to Bolingbrook where Sally passed away in 2007.

Harry retired in 1984 after 40+ years with Commonwealth Edison in Chicago.  During his years there he worked in the office as a draftsman and also in the field as a construction supervisor overseeing utility projects throughout the City of Chicago.  Harry enjoyed many activities including bowling, golfing, singing, dancing, playing cards, as well as coaching and participating in his children’s and grandchildren’s activities.  Harry worshipped God regularly his entire life and was an active member at Grace Western Springs, Zion Hinsdale, Zion London AR, and Trinity Lisle.

He is survived by his four children; Greg (Lori) of Rockford, IL, Jeff (Diane) of Burlington, NC, Kim Pieper (Bill) of Bolingbrook, IL, and Sherry Meyers (Walt) also of Bolingbrook.  Harry was the beloved patriarch of his family which included 15 grandchildren and 17 great-grandchildren.  Late in his life, Harry cherished family gatherings the most and would watch, engage, laugh, sing, and pray with his beloved family.

Harry was preceded in death by his parents Otto (1961) and Louise (Sonnenberg – 1957) and his five siblings; Elmer, Raymond, Clarence, Doris, and Louise Triebull.

Harry’s final arrangements will be handled by Simplicity Funeral and Cremation Care.  With his immediate family in attendance, Harry will be laid to rest alongside Beverly, his wife of 37 years, at Chapel Hill Gardens West in Oakbrook Terrace, IL.

In lieu of flowers, memorials in Harry’s honor can be made to The Gary Sinise Foundation for veterans.   www.garysinisefoundation.org.

Finally, at a future date, the family intends to host a celebration of Harry’s life – a life truly well lived!

Offer Condolence for the family of Harry Hitzke

When a death occurs a lot of emotions can come to the surface and confuse clear thought. Normal END_OF_DOCUMENT_TOKEN_TO_BE_REPLACED

Funeral and Cremation costs can be very confusing.  Often times other funeral & cremation providers will quote what seems like a low price, but actually they do not give you the complete costs and there will be hidden add on charges after you have chosen to utilize their services.  We have made it easier to understand by creating our: "No Hidden Fee Guarantee" package plans. These plans may include : Service Fees Merchandise Cemetery / Crematory Fees Cash Advances Taxes We guarantee that the price we give you over the phone or you see on this site, will be the price END_OF_DOCUMENT_TOKEN_TO_BE_REPLACED