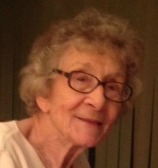 Elaine E. Holland Age 94 of Woodridge, passed away peacefully at home on October 15, 2014. Elaine was born on March 18, 1920 in St. Charles, Missouri to Joseph and Bertha (nee Kinkaid) Martin.   She graduated from Lovilla High School, Class of 1938. Elaine was a homemaker most of her life but was also employed for many years at Hassett Moving and Storage Company.

She met her husband Milton in Chicago and the two were married on May 29, 1939 in Moravia, Iowa. They lived in the suburbs of Chicago most of their married life but spent years in Hot Springs, Arkansas and Des Moines, Iowa. Milton and Elaine were of Catholic faith.

She was preceded in death by her husband Milton, her sister Bonneita Sonnenburg and her brother Joe Martin Jr. Her survivors include her daughter Suzanne Bowden of Savannah, Georgia; Milton P. (Sharon) Holland III of California and Michael Holland of Naperville. Elaine is also survived by 9 grandchildren, 19 great grandchildren and 1 great great grandchild.

In lieu of flowers, memorials may be sent to Adventist St. Thomas Hospice, PO Box 130 Hinsdale, IL 60522.  Condolences may be sent to the family at ltcsb@sbcglobal.net or mikeholland@midwestwarehouse.com

Offer Condolence for the family of Elaine Holland

When a death occurs a lot of emotions can come to the surface and confuse clear thought. Normal END_OF_DOCUMENT_TOKEN_TO_BE_REPLACED

Funeral and Cremation costs can be very confusing.  Often times other funeral & cremation providers will quote what seems like a low price, but actually they do not give you the complete costs and there will be hidden add on charges after you have chosen to utilize their services.  We have made it easier to understand by creating our: "No Hidden Fee Guarantee" package plans. These plans may include : Service Fees Merchandise Cemetery / Crematory Fees Cash Advances Taxes We guarantee that the price we give you over the phone or you see on this site, will be the price END_OF_DOCUMENT_TOKEN_TO_BE_REPLACED