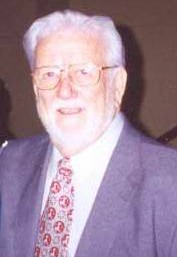 Edgar C. Baillie, 92, of Elgin, passed away peacefully on Tuesday, July 12, 2016.  Edgar was born in Staten Island, New York, on August 11, 1923 to his parents Milton and Grace Baillie.  Edgar served 8 years in the Army Air Force, followed by a number of years as a police officer in Colton California.  In his 50’s, Edgar became a minister of the gospel.  He worked for Full Gospel Business Men’s Fellowship for several years, ministering throughout the United States.  He then formed Edgar Baillie Ministries; continuing to work in the U.S.A. as well as Africa, China, Central America, and the Philippines.  Edgar’s passion for orphans led him to many underprivileged areas and nations, bringing food and supplies.

Edgar was preceded in death by his parents, his beloved first wife Charlotte, and his eldest son Bruce Baillie.

Reverend Jim Goll once called Edgar an apostle of love and faith; those two things, we truly learned from him.

Offer Condolence for the family of Edgar Baillie

When a death occurs a lot of emotions can come to the surface and confuse clear thought. Normal END_OF_DOCUMENT_TOKEN_TO_BE_REPLACED

Funeral and Cremation costs can be very confusing.  Often times other funeral & cremation providers will quote what seems like a low price, but actually they do not give you the complete costs and there will be hidden add on charges after you have chosen to utilize their services.  We have made it easier to understand by creating our: "No Hidden Fee Guarantee" package plans. These plans may include : Service Fees Merchandise Cemetery / Crematory Fees Cash Advances Taxes We guarantee that the price we give you over the phone or you see on this site, will be the price END_OF_DOCUMENT_TOKEN_TO_BE_REPLACED